It was around 5 o’clock in the afternoon yesterday that I looked outside to see it drizzling. I had planned to mow the grass for Frank and Dottie, but realized I would have to wait a little longer.   About an hour later I walked past them both saying I was going to cut the grass.  They both looked at me and said OK.  Out I went. 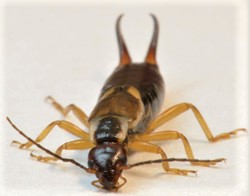 I got onto the behemoth red machine that reminds me of a pincher bug on wheels.  I affectionately refer to it as Max.  You can imagine my delight as it started right up.  So far so good.  The last time I tried to start it we had to give Max a jump.  I started going back and forth across the back yard making small talk with the two armed machine.  I had to make more than one pass over the rows I was traveling because the grass grows worst than weeds down here.  All of a sudden I attempted to turn and got stuck.  Oh no!  Hidden danger number one.

No matter what I tried I could not get the thing to move.  Then, I looked at where the wheels were and realized I had dug a couple of big holes.  I carried a piece of wood down to the back of Max.  I was thinking I could put it under the tires.  Good idea right? Wrong! Max’s petite physique hid his weight admirably.  I couldn’t lift it.  Hidden danger number two.

Finally, I had to go into the house to let Frank know I just got his new lawn mower stuck in the mud.  Being very gracious Frank said, “It’s OK, I get stuck sometimes too.”  I felt a little better.  But Max was still sitting in the mud.

Then Dottie said to me,  “I can’t believe you tried to cut the grass after the downpour we had.” Downpour?  When did we have a downpour?  Apparently in the front of the house it had just drizzled, but in the back it had poured.  I mentioned to Dottie that I had told her I was going to cut the grass she just said she didn’t hear me.  Hidden danger number three.  With age comes decreased hearing.  I totally get it now when my kids say I am going deaf.   The three of us just chuckled.

So fast forward to midnight.  As I am lying in bed about to fall asleep I hear it raining.   All I could think about was poor Max all by himself in the back yard uncovered getting soaked.  Oh well, it wasn’t like I could go out and get him right?

Today Frank and I decided he was going to try to tow me out of the mud using his electric wheel chair.  Honestly, I was skeptical.  All we needed was to get him stuck in the mud too.  Then we would be in a real pickle.  But, I deferred to Frank and tied the rope around Max and his wheelchair.  I started Max, and as Frank pulled I gave it some gas.  I looked behind me and I see Frank’s chair leaning over on the hill.   Max isn’t budging.  I jumped off and ran up to Frank to tell him to stop pulling.  Repeat of hidden danger number three.  Thankfully, Frank didn’t get stuck or topple over.

Our last ditch effort was using his pick up truck.  I got Dottie to back the truck onto the side yard so I could hook the rope to the back of it.  Frank was positioned between me on the tractor and Dottie in the truck.  I waved to Frank so he could let Dottie know she could start pulling.  All of a sudden Max’s tires took hold and I finally got out of the mud.

We were due to have another rain storm today, so I just stayed on the tractor and cut the grass.  It is storming as I write this post. 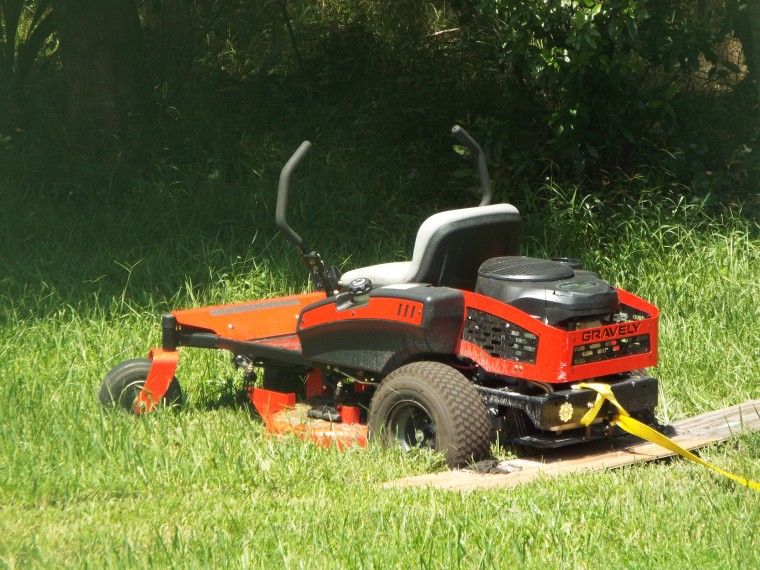 Have you ever ridden a tractor like this?  It is a study in coordination.  You have to move both handles to make it go forward, turn or backward.   Frank likes it because he says it’s got a zero degree turning radius on it.  That zero degree turning is what started this craziness.  Give me a steering wheel any day of the week.

Here is a picture of the damage to the back yard.   What should have taken a couple of hours at the most tuned into two days of hidden dangers while cutting the grass.

The content found on Cookies & Moo is the property of Wanda M. Williams ©2012 – 2018, unless otherwise stated. Unauthorized use and/or duplication of this material without express and written permission from this site’s author and/or owner is strictly prohibited. Excerpts and links may be used, provided that full and clear credit is given to Wanda M. Williams owner Cookies & Moo.
Gary A Wilson's Stories in a Dime of Time

Autobiographical fun in 10 minutes or less