Skip to content
It’s been almost a month since I have posted here.  I have been a little preoccupied.  I have had to make a difficult decision.  I will be moving this year. I really didn’t think I would ever move again after Gary and I moved to NC, but things change. Since Gary died I find it’s just too expensive for me to stay here.  I only have my income now and I really don’t want to be house poor.  I have my son in Miami Beach that I want to be able to visit often as well as friends and family all over the country.  So, my daughter Kelly and her husband Joe have invited me to live with them.  Well, actually they are putting a mother in law suite on their house for me.  It’s perfect.  I can see my three grandchildren as much as I want any time I want.  And none of my kids have to will worry about me living all alone in my forest.  🙂  I will definitely miss my 5 1/2 acres of solitude country living, but I will also love the convenience of city life.  Except for the traffic, that is.
I have been going through all of my stuff.  And I do have a lot of stuff.  Too much stuff.  Silly stuff.  I have been sorting, donating, selling, giving, and throwing out stuff.  Living with a pack rat for over 40 years has made my job even harder.  Gary’s philosophy was “you don’t have to feed it”  so he kept all of it.  This philosophy was coupled with “if one is good, 10 are better.”  Now I am not saying that it never paid off, but honestly, it’s too much stuff.
While construction is being done on Kelly and Joe’s house, they will be staying here with me.  So I really can’t put off working on the “stuff”.  There will be five other people living here and they won’t fit if the ‘stuff’ remains.
I feel that Lent has in some ways passed me by.  I did not do all the things I had planned to do preparing for Easter.  However, God has continued to work in me during this most holy season.  I know this because I have found acceptance of my situation and am at peace with the solution God has given me.
I never in a million years thought I would end up having to give up my home. But after a lot of soul searching and a few tears I realized that all I am giving up is a house.  A building.  A thing.  My home will always be with me in my heart. My home is and always has been my faith and family and I will have my home with me no matter where it physically is.
I wish you and yours a holy blessed Easter. 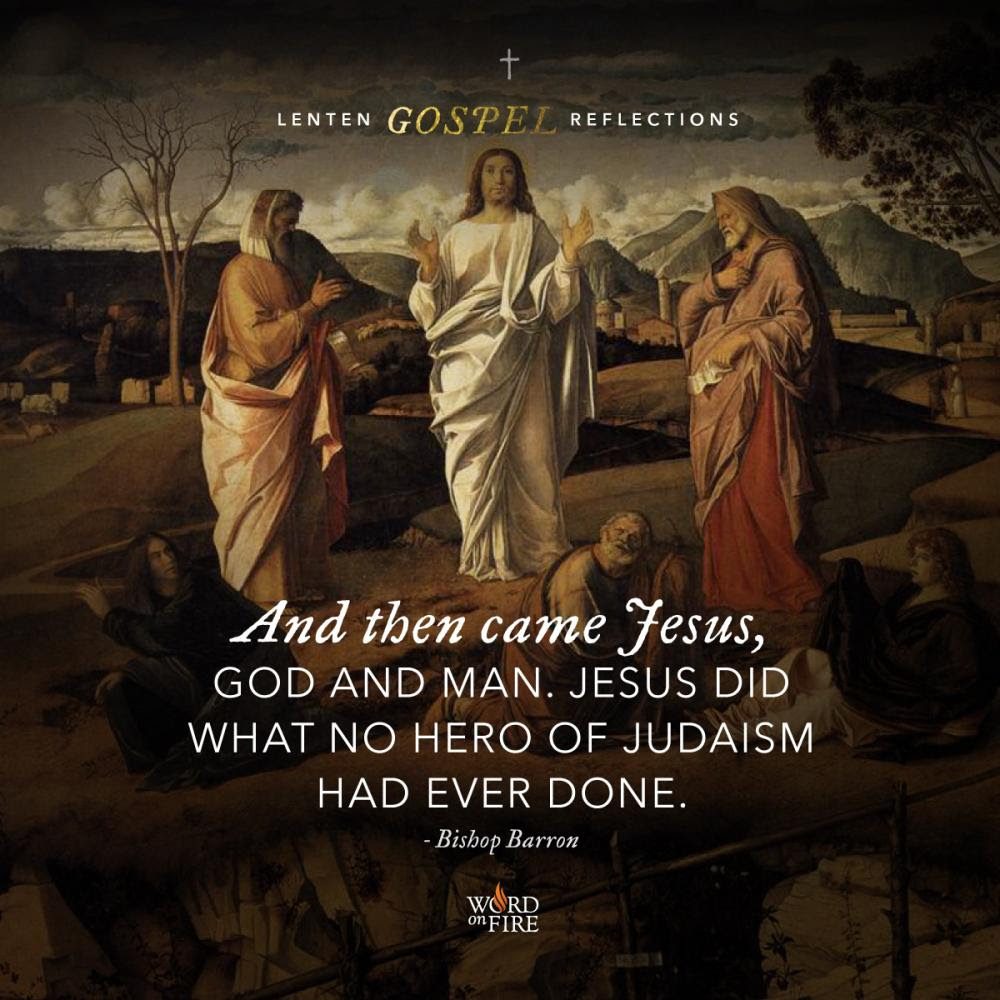 1 a After six days Jesus took Peter, James, and John his brother, and led them up a high mountain by themselves.*
2* b And he was transfigured before them; his face shone like the sun and his clothes became white as light.
3* And behold, Moses and Elijah appeared to them, conversing with him.
4Then Peter said to Jesus in reply, “Lord, it is good that we are here. If you wish, I will make three tents* here, one for you, one for Moses, and one for Elijah.”
5c While he was still speaking, behold, a bright cloud cast a shadow over them,* then from the cloud came a voice that said, “This is my beloved Son, with whom I am well pleased; listen to him.”
6* When the disciples heard this, they fell prostrate and were very much afraid.
7But Jesus came and touched them, saying, “Rise, and do not be afraid.”
8And when the disciples raised their eyes, they saw no one else but Jesus alone.
9d As they were coming down from the mountain, Jesus charged them, “Do not tell the vision* to anyone until the Son of Man has been raised from the dead.”

Friends, today’s Gospel recounts the story of the Transfiguration. Here the glorified Jesus represents the fulfillment of the Old Testament revelation, symbolized by Moses, representing the law, and Elijah, representing the prophets.

Let’s look at the two basic divisions. God gave the Torah, the law, to his people, in order that they might become a priestly people, a holy nation, a people set apart, in the hopes that they would then function as a sort of magnet to the rest of the world. But the law didn’t take. From the very beginning, the people turned away from its dictates, and became as bad as the nations around them.

And then the prophets. Repeatedly we hear the call to be faithful to the Torah, to follow the ways of the Lord. The prophets constantly turn on Israel itself, reminding her of her own sinfulness. And then came Jesus, God and man. Jesus did what no hero of Judaism had ever done. He fulfilled the law, remained utterly obedient to the demands of the Father, even to the point of laying down his life. He brought the Torah and the prophets thereby to fulfillment.

I thought I would share this with you today.

It’s been a while since I have posted here.  I had decided not to continue with this blog and actually deleted it.  But, I hadn’t deleted it permanently.  I guess I knew that I really didn’t want to get rid of it, just needed some time to reflect on what my purpose is in having this blog.  So, I have given it some thought and I still don’t exactly know the purpose except that I feel that I am supposed to keep it.  So, hopefully it will be a blessing to someone who reads it.

I am going through a time of prayer difficulty.  I can’t seem to keep my mind on my prayers and I actually fall asleep while praying.  Even when I am sitting up.  I am trying to work through this problem, but I don’t seem to be able to get anywhere.  At confession two weeks ago I tried to talk to Father about it, but he just said not to worry about it that it will straighten itself out.  I am not so sure. It seems that my husband’s death is hitting me in ways I had no idea it would be possible.  I am angry over the mess he has left me.

I have faith that God has me where I belong in my life.  That He is leading me in a new path for my life.  But, I sometimes let things worry me a bit.  Unfortunately, my husband left me in a financial bind.  I have been trying to refinance my home so that I can stay here. God has other plans for me.  I am unable to obtain a mortgage.  So, it looks like I will be living with my daughter and her family. They are building a mother in law suite for me.  I am blessed to have such good children.  🙂  I will have to give up much when I move, but those things aren’t important.  I will be able to continue my quilting and will have plenty of room for my sewing machines.  And I will be close to my grandchildren and can see them daily if I want to.

My three children have been worried about me living alone.  This is the perfect solution.  🙂

We are in the season of Lent.  A time for repentance, fasting and contemplation on the gifts God has given to us.  His only Son, Jesus Christ, came down from heaven, became man and was crucified for us so our sins would be forgiven.  As Catholics, we say those words a lot.  But how much do we think about what we are saying?  The idea that an omnipotent God would love us so much is just awesome. I feel so blessed to have been born with Catholic parents and have experienced my faith throughout my life.  Although there were time when I am sure Jesus was disappointed in me, but the fact that He has never given up on me says so much.

I have decided that I will say a prayer for anyone who leaves me a message to do so.  I do not save contact information or share it with anyone, so if I can pray for you please fill in the form.

During Lent we attempt to become closer to God.  This small prayer to our Heavenly Father expresses that attempt succinctly.  Without grace we cannot live the life God created us to live.
Prayer, abstinence, fasting, and corporal works of mercy strengthen our spiritual being which opens the floodgates to mercy.

There are several online organizations that offer reflections and suggestions for improving your Lenten experience.  I have listed some of them here.
Bishop Robert Barron founder of Word On Fire will send a daily reflection to your inbox.  Click on the link to sign up.
MyConcentration.org run by Anthony Mullen offers a Lenten Mercy Challenge here.
L.E.N.T. In the Desert e-book.
Katie Warner has resources on her website.
Catholicism About.com has many good articles on Lent.
Pray More Retreat offered by Pray More Novenas.  This is an online retreat.  This is just a few resources I have found.

The content found on Cookies & Moo is the property of Wanda M. Williams ©2012 – 2023, unless otherwise stated. Unauthorized use and/or duplication of this material without express and written permission from this site’s author and/or owner is strictly prohibited. Excerpts and links may be used, provided that full and clear credit is given to Wanda M. Williams owner Cookies & Moo.

A dose of fetish. Good friends. An incomparable muse.

A Unique Title For Me

An onion has many layers. So have I!

Welcome to darradaily where you get information about my opinions on lifestyle topics with Nigerian peculiarities as my niche. I'll move away from my niche from time to time. Don't forget to follow me for funny and educational contents✨.

reflections on what life gifts you

Man is a self-conscious nothing. ~Julius Bahnsen

Word of the Day Challenge

To participate in the Ragtag Daily Prompt, create a Pingback to your post, or copy and paste the link to your post into the comments. And while you’re there, why not check out some of the other posts too!