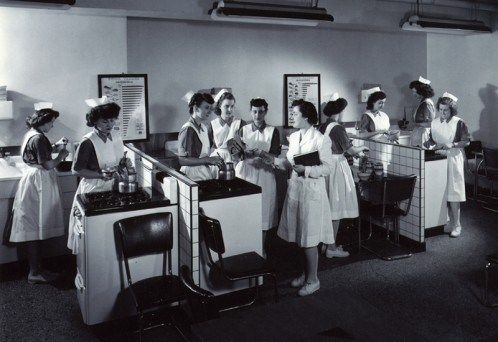 When I was in my twenties I went through a practical nursing program  It was a year long course that was very concentrated and we had very little time off during that year. We had a couple of women who had raised their kids and had put off doing something outside the home.  One of those women was Mary G.

Mary was in her early fifties.  She was down to earth, had a great sense of humor and very little rattled her.  There were a few of us on the orthopedic floor doing a rotation. Now, when people are injured or sick it either brings out the very best behavior in them or the very worst.

We were having a run on young guys in their late teens to early twenties who had been involved in motorcycle accidents.  There was this one guy in Room 209.  I don’t think I will ever forget him.  He was a nasty cuss and thought he had no responsibility in his care.  Anyway, one of the younger girls in my class, Betty,  had been assigned to him. Every time she went into his room, he exposed himself to her.  He did everything he could think of to embarrass her.  She would come out of his room so upset.  He even threw his bedpan at her.  I felt so bad for her.

One day he was just merciless to Betty and she was ready to throw in the towel saying she could never get through the program if she had to deal with patients like that.  Mary got wind of what was going on.  The next time this patient rang his bell, Mary said I’ll get it.  Well Betty and I followed her to his room and stood outside the door so we could hear if he was just as inappropriate to her as he had been to young Betty.

Sure enough, Mary approached the bed and he pulled the covers off of himself to embarrass her.  Mary didn’t miss a beat.  She looked at him, very straight faced and said, “Oh that’s nothing, the guy in the next room has two of them.”  This kid just shut up and covered himself.  Mary was able to totally befuddle him.  Needless to say, Betty had no more trouble with her patient.

The content found on Cookies & Moo is the property of Wanda M. Williams ©2012 – 2022, unless otherwise stated. Unauthorized use and/or duplication of this material without express and written permission from this site’s author and/or owner is strictly prohibited. Excerpts and links may be used, provided that full and clear credit is given to Wanda M. Williams owner Cookies & Moo.

THE WORLD IS THY SHIP

Sailing the seas of life in Christ

Short Wisdom
ModNChic: It's all about enjoy a good life and lifestyle