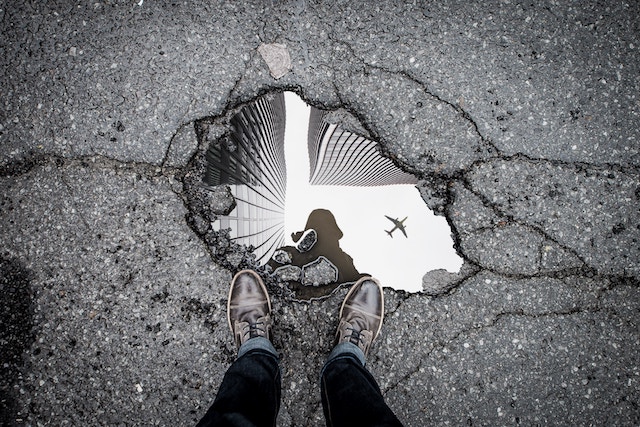 photo by Marc-Olivier Jodoin via Unsplash

A lone figure looks into the fantasy played before her by the pothole.  Diamonds sparkle so brightly it almost blinds me, as an airplane flies to some exotic place carrying my dreams of travel and adventure with it.  If only I was on the plane. 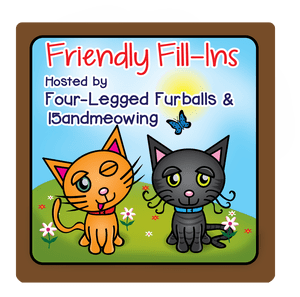 Friendly Fill-Ins is hosted by 15andmeowing and Four-Legged Furballs.  Follow the links if you would like to join in.  Here are this week’s Fill-Ins and my answers.

1. My favorite subject in school was biology.  Actually, I liked all the sciences except for Physics.  But biology was my all time favorite.

2. An extracurricular activity I participated in was being a member of the Future Nurses Club.  The club cemented my desire to become a nurse.

3. I want to learn many things.   I know that isn’t a good answer.  I have always wanted to learn to take really good photographs.  I can see that the exercises I have done are improving my shots.  That is thanks to many talented people sharing their expertise online.

4. It takes courage to admit you are wrong.  When you admit you are wrong, you are letting yourself be open to all sorts of reactions.  But, I find that admitting I am wrong about something either important or not, opens the door for great communication and learning on everyone’s part.

t was getting late. The children in Miss Sally’s class had reached the limit of waiting. Miss Sally called down to the principal’s office to find out what the hold up was. The surprise had arrived late but was on the way to her classroom now, she turned to the children and gave a thumbs up.

Soon there was a knock on the door. One of the students got up to answer it. He opened the door there stood a beautiful Golden Retriever. He had a jacket on that said his name was Max. The child squealed with delight. He looked into the hallway to find out who had brought Max to school. There was no one there.  He invited Max in.

Max was a very sweet dog. He loved the children. He let them pet him and he would placate them with simple tricks for treats which he had in a pocket in his jacket. Miss Sally was smiling because the surprise was having the desired effect on her class. This was her introduction to learning responsibility about animals.

The children realized that there was a stranger standing in the front of the class with Miss Sally. Mr. Henry had joined Max and was enjoying the sight. The children had a ton of questions for him. How old is Max? What does he eat? Where does he sleep? The usual picayune questions third graders ask. Mr. Henry answered all of their questions.

Mr. Henry began to talk about adopting pets because there were so many animals that needed homes. The children sat very still and listened to how Mr. Henry had come to have Max.

I was on a trip in the Caribbean to an island called St. Lucia. As I walked along the beach, I saw a wet dirty dog running toward me. A site I had never expected to see on this tropical beach. When he reached me he began jumping around as if he wanted me to play with him. I couldn’t help but play with him.

As I headed back to my hotel, I realized he was following me. I asked the attendant if he knew who’s dog it was. He told me that he was a stray that hung around the hotel. Sometimes he got fed from the kitchen. but often begged the beachgoers for food.  That made me very sad because he was alone with no one to love him.

Mr. Henry explained the Caribbean had had terrible hurricanes that destroyed many homes. People could not take care of their pets anymore and they had to let them go.  It was taking a long time to rebuild. If you were not at a tourist area the island was pretty bare.  I decided to adopt Max.  It would help the dog,  but would also take one stray from the streets of St. Lucia.  A win-win!  It took a lot of paperwork, but I was able to bring Max home. He has been my companion ever since.

The children were happy to learn about pet adoption and thanked Mr. Henry for bringing Max to school. The kids asked if he could visit them again.

There was an error retrieving images from Instagram. An attempt will be remade in a few minutes.

The content found on Cookies & Moo is the property of Wanda M. Williams ©2012 – 2018, unless otherwise stated. Unauthorized use and/or duplication of this material without express and written permission from this site’s author and/or owner is strictly prohibited. Excerpts and links may be used, provided that full and clear credit is given to Wanda M. Williams owner Cookies & Moo.
Twenty Four

Your second chance to be creative. .

"Don't be ashamed of your story it will inspire others!"

Travel. Seek the beauty in the chaos. Repeat

“Twenty years from now you will be more disappointed by the things that you didn’t do than by the ones you did do. So throw off the bowlines. Sailaway from the safe harbor. Catch the trade winds in your sails. Explore. Dream. Discover.” ~ Mark Twain

I have people to kill, lives to ruin, plagues to bring, and worlds to destroy. I am not the Angel of Death. I'm a fiction writer.